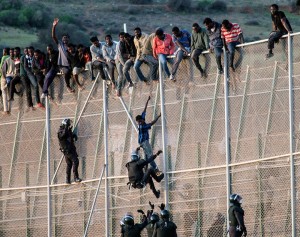 Surprise, surprise.  The elites of polygamy want all the young girls for themselves!  The throwaway young males who used to be sent into battle to kill each other, along with a low life expectancy that caused many of them to die, are now sent to monogamous countries to obtain females.

It’s getting harder and harder to send young males to kill each other.  The young throwaway males would rather be on their Iphones….

The only solution is to reform and grow up